Well, hellooo! It´s great to have you back. You´re just in time for my out of this world post on my latest spam treasures. Today we´re welcoming Part 5 in the series and I can´t be more proud than I am now knowing that I´ve been blessed with a large amount of wonderful, slightly confusing spam comments. 26 spam comments total! Can you believe that?

Well, 20 of those spam comments were just links, which was a little disappointing. I L.I.V.E for these comments, spammers! Y´all can´t send me a pathetic link. What should I do with links?

Fortunately for me ( and you ), the remaining 6 spam comments were well worth my time. Especially spam comment #6. Whatever you do…. do NOT skip the 6th comment. I promise #6 will be a life and game changer. You´ll either age rapidly or you´ll fall asleep. There´s really no telling. Comment #6 gave me a reason to fetch a drink.

4.    You could have told me this over wine instead of a pfft comment.

6. The Comment That Never Ends ( including my equally never ending reply ).

Dude, 70´s fashion? I just LOVE flared pants. Ever since the return of bell bottoms in the early – mid 90´s I´ve been a fan and can´t seem to get away from em.

Oh, Jason Everman. You mean the guy who played for Nirvana? Nirvana, the reason why I wore an oversized red flannel shirt with ripped jeans and Doc Martins. But I have to admit, I wasn´t a fan of the music.

I must say 918kiss pc – you tickled my interest with your Sophomore music choices. I was a HUGE fan of System Of A Down, even managed to go to a few gigs in my early 20´s. Oh, the days * sigh * Did I ever tell you I was in a crowd ( what I learned was the actual mosh pit ) and was nearly beaten to death. I´m short so I received a few blows from elbows. You should have heard my mother when she saw me after I got home. Sheesh. I was also at a Manson concert once. Gotta tell you, though… 45 minutes without an encore for 60 euros. Kind of a rip off, if you ask me. But back to you: Does one need a reason to like SOAD? No. On to the second part of your message…..

Oh, we talking hair now? I absolutely feel you on being a maniac about one´s own hair. Can I tell you a secret? I´m a hairdresser with a master’s degree. So, I actually enjoy cutting hair, too ( sometimes ). There was a time when I hated it so I decided to go to uni and get a degree in chemistry. I am now officially overqualified for my job. * sigh *

The “one of the days” chorus line you mentioned- Sheesh, I misread that one and thought you were talking about the Foo Fighters song “These Days”. Great song but for a minute there I thought we would go back to Nirvana. Because you know the issue with him being the “new” drummer and all that.

The Beatles- right. Wait… what´s wrong with “Hey Jude”? That´s the song I always sing when I´ve had one too many….

Let me read the third and final part of your comment before I sing Hey Jude to you. 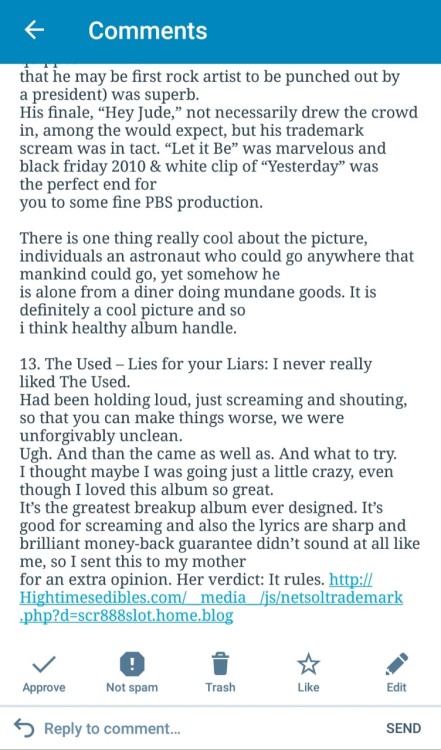 Meeh * wave off * Never been a fan of The Used, either. I somehow grew out of that style of music. How can you say The Used scream a lot? System Of A Down is worse.

Honey, what´s this about being unclean? You ain´t washing yourself? I feel that our friendship has already evolved so I´m going to give you a little advice, from one friend to another- I grew up with brothers so I´m in the know-how on how male hygiene works.  Muchacho, you need to wash yourself if you feel unclean.

Back to music: You like breakup albums? Remember when Take That broke up? No, wait- Technically, the band was already done for when Robbie Williams left and the album sans Robbie was for shit. Remember when Guns´n Roses broke up? Pfft. I actually refuse to discuss that one because I get kind of emotional ( and I was 15 at the time. A delicate age for a band to just throw the towel, you know? )

I don´t doubt your mother´s judgement. If she says it rules then it rules. I imagine your mom´s super cool. Mine wasn´t. She nearly killed me when she saw what I did to my new Doc Martins ( the same day I got them I hopped on my bike, put some speed on it and let the caps of my boots glide over the concrete, creating the “used, worn out” look. No one ever wanted new Docs. Then she almost passed out when I took a stone and rubbed it over the knee section of my 501 Levis jeans, creating authentic holes. Mom was not amused, not even after I told her she had no idea what fashion was. She threatened to send me to a home when I presented my new necklace to her ( a dog collar with spikes ). Now, after all the years that have passed she fondly remembers the days when her daughter acted like a possessed person. She also wonders what would have happened if she had actually sent me to a home. Lol.

And for some odd reason the strange grunge chic became a book blogger.

That´s it for the Spam Treasure Box! I hope you enjoyed the little blast from the private past * wink *

Thank you for reading.

Sending much normal, mature love to all the bookish hombres out there ❤