This is a topic I´m not all too happy to write about because… Well, there are topics you just don´t discuss. Sadly though, I feel the need to get this off my chest.

Back in the day my first boss gave me some valuable piece of advice:

Never talk about religion, politics or money with a customer. Later in life I added the “raising kids” topic to that list because that´s also something people can easily argue over. A simple fact. I´ve lived by the “Never Discuss….” rule ever since.

After a happy shopping spree on Amazon I spotted a beautiful book cover with a great book title. When I saw the author´s name my excitement grew. Mia Sheridan.

One of my favorite romance authors published a new book! `More Than Words` was published June 12th! WOOP!

I didn´t hesitate with reading a few Amazon reviews. This one was what sealed the deal for me. 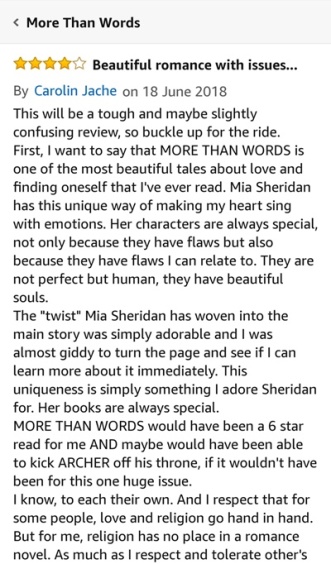 Wow. First off, I think the review was well constructed and perfectly written. The reviewer, despite her non religious beliefs, rated the book with 4.5 stars, whereas I….

… I wouldn´t have been so generous.

I´m an atheist. A happy one, at that. I, too, respect and accept other people´s beliefs and would never judge them publicly for what they think exists or not just as I would never want people to judge me openly for not believing in God.

The reviewer is right: Some people think love and religion go hand in hand. I believe religion should stay far away from love and from romance novels. Unless you´re an author writing epic stories about badass vampires and demons who reveal just how twisted and corrupted the religious world is ( Read Hedoschism by Lindsey Clarke on Wattpad )… you shouldn´t really include religion in a romantic story.

Of course, there are many subjects readers avoid, such as: adultery, erotica in general, rape, M/M, F/F, M/M/F, fetish, etc. But none are as controversial as religion.

I´m fully aware that authors will never reach everyone´s hearts with their writing, no matter what they write about or what topic they include. Opinions vary. Why shouldn´t authors be allowed to include religion in their romance novels, right?

But for me, the happy atheist who wants to read a new Mia Sheridan romance novel, it´s disappointing to find out there´s religion included. I won´t buy the book.

Yes. One single review had the ability to influence my book purchase. GOOD! That´s what reviews are for.

I´m actually grateful for the reviewer´s insight because if I had bought the book without knowing about the “issue” that bothered the reviewer I would have been a very unhappy book blogger.

Because I don´t believe in God. Because religion doesn´t make sense to me. Never has and never will.

Now, you´re probably asking what happens when I accidentally stumble upon a romance novel that has religion included.

Due to my lack of interest on the subject I immediately DNF a romance novel that has religious characters in it.

And I also bet you´re asking why I accept religion in paranormal / fantasy novels and not with romance novels?

The answer is simple: Fantasy or paranormal stories are basically modern-day fairy tales drawn out to extreme levels. There´s creativity in world building, character forming and storytelling. For me, God and the Bible fit perfectly in that niche. It´s make – believe. It´s not real.

Whereas romance novels are set in realistic worlds and characters deal with realistic issues. God and the Bible do not fit in a world I can relate with.

I struggle to believe God and contemporary romance novels could ever go hand in hand.

I´ve probably offended many people with my opinion on the subject, even though I´ve tried my best not to discriminate religion or people who believe in God.

But just as religious people have the right to openly love and praise their God ( and those who do praise God do it rather loudly ), I am also allowed to do the unthinkable and state my opinion on how I think religion is nothing more than a waste of time. Seeing religion in romance novels does not sit well with me.

Do not hesitate to leave a comment. I´m ( thankfully ) one of those people who agree to disagree.

NOTE FOR OVERLY RELIGIOUS MEMBERS OF SOCIETY: I´m happy. Please do not tag me in any religious posts on social media and do not pray for me. If you feel the need to block / unfollow / unfriend me due to our religious differences then I will not stop you.

21 thoughts on “Religion In Romance Novels”