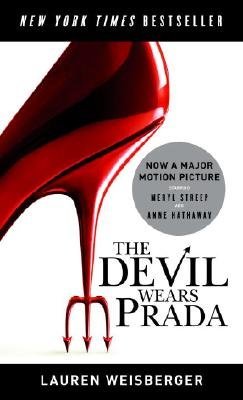 Fine. Watching the movie before reading the book wasn´t one of my brightest ideas, I´ll admit to that. I should have known that movie-to-book doesn´t work. I´ve learned that lesson after watching The Horse Whisperer first and then reading the book. But hey- Can you blame me for making the same mistake twice? There was a huge possibility that my experience would have been different, right? * hangs head in defeat * Wrong. The little voice inside my head warned me not to read `The Devil Wears Prada` after I watched the movie. I still did it.

THE DEVIL WEARS PRADA gives a rich and hilarious new meaning to complaints about “The Boss from Hell.” Narrated in Andrea’s smart, refreshingly disarming voice, it traces a deep, dark, devilish view of life at the top only hinted at in gossip columns and over Cosmopolitans at the trendiest cocktail parties. From sending the latest, not-yet-in-stores Harry Potter to Miranda’s children in Paris by private jet, to locating an unnamed antique store where Miranda had at some point admired a vintage dresser, to serving lattes to Miranda at precisely the piping hot temperature she prefers, Andrea is sorely tested each and every day-and often late into the night with orders barked over the phone. She puts up with it all by keeping her eyes on the prize: a recommendation from Miranda that will get Andrea a top job at any magazine of her choosing. As things escalate from the merely unacceptable to the downright outrageous, however, Andrea begins to realize that the job a million girls would die for may just kill her. And even if she survives, she has to decide whether or not the job is worth the price of her soul

We´ve all seen the movie, right? So, there´s no need to explain the story. I loved the movie. It was so entertaining and I just loved Meryl Streep. That woman played her awesome roll so well. The book? The original root?

Let me put it mildly: This book wasn´t entertaining. It wasn´t the movie.

I also don´t believe I would have liked this book anymore if I hadn´t seen the movie. The writing was acceptable but not engaging enough. The story also took ( what felt like ) a million years to take off. And when that point arrived….I still wasn´t happy. I kept thinking that something was way off.

It wasn´t until I was 2/3 into the story when it dawned on me that the characters were the problem. Call me picky….but these characters didn´t have their own voices. I mean….if an author creates a character….surely they imagine them a certain way. What happened? What went when wrong? The characters were ( at times ) dull. You always see characters change or grow in stories, but not in this book. I disliked almost every character. They were either snobby, bitchy, or they were constantly feeling sorry for themselves. COME ON! If you´re not happy with your job and you´re making others miserable… New York is huge. Go and find something else!

It´s mucho hard not to notice the New York Times Bestselling bit on the cover. Why this book reached that status is beyond me. Surely, there must have been a mistake because the story wasn´t that good.

It took me forever to start and finish. It takes me about 3 nights to read a 400 and something page book. And The Devil Wears Prada took me weeks. I just can´t see why everyone was making such a fuss about this book. Seriously, there is absolutely no reason for anyone to go ape-shit. The story is flat and couldn´t hold my attention for longer periods of time.

The author had an idea and she put it on paper. Write a beginning, write the middle section, and end the story. Hmm….THIS WAS A 400 + PAGE BOOK! Where was the build up, where was Andrea´s passion? I´m not kidding…..I had my hopes set up really high for this one and all it brought me was agony, anger, and frustration. I blame everything on the movie.

Before you ask….yes. I did finish this book. Was the end satisfying? Yes and no. The end confused me but I was a happy camper about the fact that I didn´t have to continue the story. Because, I won´t. There´s a book #2 out there called `Revenge Wears Prada` which I won´t dive into because I literally have no enegery left for more.

The only thing I liked about this book was the fashion bits. And I´m not fashionable nor do I understand trends and the fashion market ( I love my sweats with holes in them. If I could I´d wear them 24/7 ) but I really enjoyed the fashion bits in this book.

If you ask me….with the way this book was, it isn´t worth it. It kind of felt like I wasted my time. Hours and hours no one will ever give me back. The only thing that is keeping me from giving this book to my neighbor is the cover. It just looks too pretty to give away.

Would I recommend this book?
– No. I wouldn´t. BUT I recommend you watch the movie. That´s definitely entertaining and alot cheaper. Plus you get a story and get to look at beautiful people.

Would I re-read this book?
– uuuuh…no.

My emotional state after finishing this read – Disappointed.