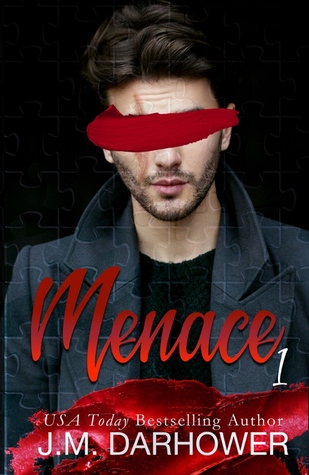 Once upon a time, there was a guy who got so fed up with life that he resorted to murder and mayhem just to feel alive.

Lorenzo Gambini is bored. So fucking bored. Most people either annoy him or avoid him, afraid to face him. Figuratively. Literally. With his face partially disfigured, scarred, he looks every bit the monster the stories make him out to be: the notorious menace they call Scar. They say he’s a sociopath. Maybe he’s a psychopath. Whatever path he’s on, people tend to stay far away from it.

Until one day, a young woman bumps right into him–a woman just as fed up with life, but for much different reasons. With a Scarlet Letter inked on her wrist and secrets buried deep in her soul, Morgan Myers is running from something… or maybe somebody. Lorenzo isn’t quite sure.

You can bet your ass he’s going to figure it out, though.

Bless J. M. Darhower, for that woman is one hell of a storyteller. I went through 346 pages of brilliant holy shitballs! Damn, what a story. `Menace` ( Scarlet Scars, Book 1 ) by J. M. Darhower has definitely earned a place on my sacred „Fuck Yeah!“ bookshelf.

This story is even more nail-bite-worthy than the `Monster In His Eyes` series was ( and I LOVED that story / series to bits ). `Menace` is brutal, unforgiving, captivating, unpredictable, dark, sexy as hell and filled with action. Exactly what I want in a book.

Still- I´d like to remind that this story comes with a small warning.

The warning is there for a reason. Although none of the dark elements disturbed me, I´m sure they could bother other readers.

Lorenzo „Scar“ Gambini, a twisted, ruthless killer / mafia boss gets bored out of his wits until he finds someone who brings the spark back into his boring world ( That, alone, screams „READ ME“ because which mafia boss ever gets bored?).

We meet Lorenzo in `Targets On Our Backs`, and even then I was 100% convinced that the passionate nutcase needed his own book. Lorenzo was so bat shit crazy and unpredictable, even I was terrified for the other characters lives.

There´s no doubt Lorenzo is one of the most mental Heros I´ve ever come across. He´s impulsive and completely disturbed and he can be scary as hell. On the flip side- Lorenzo is a clever guy with a heart hidden somewhere beneath the many layers of crazyness. He always has a good explanation for his actions ( and the explanations make sense * face palm * ). He´s just a super complex character you have to love ( no matter what crime he commits ) That character is so full of surprises.

Morgan / Scar ( Heroine )was just as out of this world cool. She has her own package to carry but she´s still a wonderful character. I fell in love with her from the start and loved her even more at the end.

I´m in love. There isn´t a thing I can complain about because this book has the whole package.

The writing is as brilliant as I expected it to be. The dialogue is fantastic. Have I forgotten to mention how in love I am? I have? Tough shit. I´ll say it over and over again just so you won´t forget it.

If you´re looking for something dark, something twisted and so full of everything then I highly recommend this intense read.

The Characters -5 stars ( * Way cool. Like- out of this world screwed up but still cool )

My emotional state after finishing this read – Still recovering. But I desperately want to become apart of Lorenzo´s gang. ( That sounds weird, I know. )

Make sure to get your copy on Amazon.com